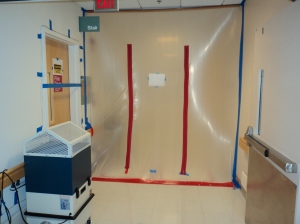 During a pandemic of an airborne infectious disease, the number of patients needing hospital-based healthcare services may exceed available negative-pressure isolation room capacity. To evaluate one method of increasing hospital surge capacity, a demonstration was conducted in which a temporary negative-pressure isolation ward was established at a functioning hospital. Negative pressure was achieved in a 30-bed hospital ward by reducing the supply fan speed to 60% of its normal operating speed. Pressure data was continuously measured at 22 locations, including internal rooms and around the ward’s outer pressure envelope. Ventilation airflow data was used to calculate air exchange rates and to understand temporal variability in internal pressures. An average pressure of -29 Pa was established on the test ward relative to the main hospital hallway, which is about 10 times higher than the CDC guidance for airborne infection control. No occurrences of pressure reversal occurred at the ward’s outer envelope, even when doors were opened into and out of the ward. Changes in internal pressures were related to shifts in ventilation airflows, with some internal spaces becoming neutrally or slightly positively pressurized. This test demonstrated that establishing a temporary negative-pressure isolation ward is an effective method for rapidly increasing surge capacity.